Esperèr – an isle of hope, a land of stories 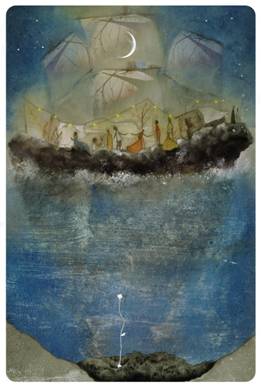 A NEW ISLAND IS BORN IN EUROPE: ITS NAME IS ESPÉRER! THE ONLY WAY TO REACH IT IS THE "CERTIFICATE OF EXISTENCE".   Espérer is an island originated from the rocks of Ventimiglia and the crossroads of many stories. From the ideas of a mustache Norwegian explorer, from the need of an Italian playwright to explain to two girls what borders are, from the stories and interviews made to migrants who live in Italy today, from a book full of drawings ... from all this and much more comes L'Isola di Espèrer. We can all reach it, there is no need for passports, we only ask you to provide the "certificate of existence" and not to "remain inactive in front of the story". Espérer is the story that becomes utopia and will tell us about the future and how small our borders will seem in a few years time. It will be the Teatro delle Forme with the production of The Goodness Factory to bring it on stage in the first stage of a tour that wants to cross Italy from Sicily to the Port of Genoa, in the magnificent setting of the Suq Festival.   You can also be part of this story, subscribe to the registry of Espérer and support the project on:   www.produzionidalbasso.com/project/l-isola-di-esperer

Rete Italiana di Cultura Popolare – the Italian Network of Folk Culture, Specially Unknown partner from Turin, is developing a theatrical performance Esperèr – Isle of hope. With Esperèr they want to address the political and social climate in Italy in general, and especially towards immigrants, which worsened significally in the last few months. “People are scared everywhere”, says Ilda Curti, project officer of Specially Unknown “RICP wants to “sensitize” people towards hope with this performance”.   Esperèr is a follow-up of a fantasy story Antonio Damasco, a theatre director and performer, and also director of the RICP, has written inspired by the refugee crisis in 2015. It is about the “rejected”, stuck on a rock between two countries that don’t want them and don’t let them in. At the end, the rock literally separates from the mainland, becomes an island and sales away.   The topic of the new Esperèr is: What’s happened to the isle of Esperèr 35 years later, in 2050? It will be constructed as a feasible utopia: Esperèr has become a land of stories, where people don’t need to have a passport, their story is enough to become a citizen.   This narrative theatre will be based on the fragments from the stories collected during the Specially Unknown project. It will be staged end of May in Torino, in a cultural hub for young people, and also in small towns of Avigliana and Oulx, both at the border with France, both confronted with refugees trying to get into the heart of Europe. It will also play at the Suq festival in Genoa in June 2019.   RICP is starting a crowdfunding campaign for the citizens of 10 Italian cities, to contribute to having this performance in their city. All contributors will be issued a certificate of existence. Not only the contributors, but all who come to a play will get the citizenship of Esperèr, and the certificate of existence.   RICP is working to get a broad support of the idea of Esperèr citizenship - certificate of  existence “I’m a citizen of Esperèr”. If you are interested in becoming a citizen of Esperèr, if you want to get a certificate of existence, and want to know more about this performance, follow the website RICP and this website.